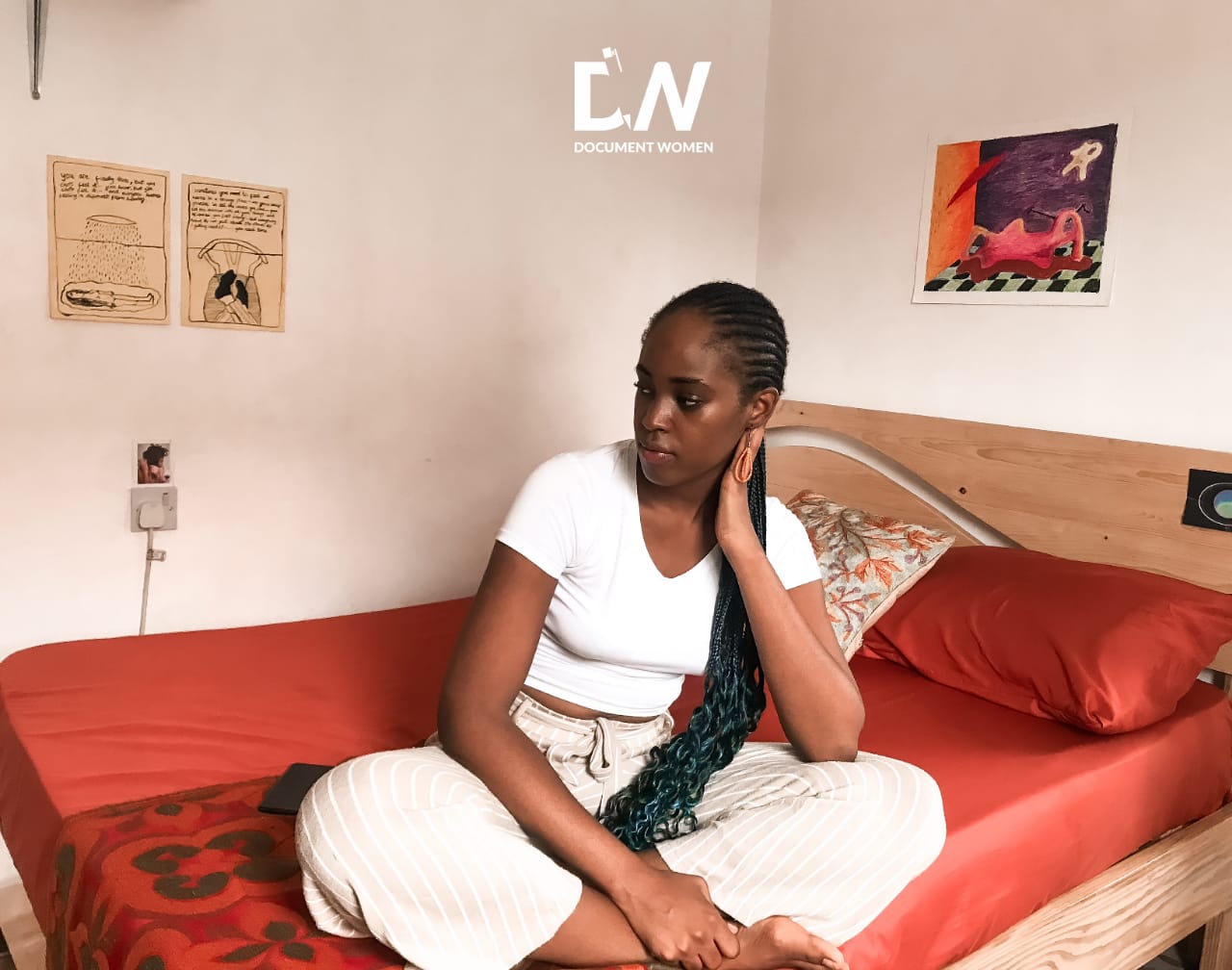 Yadichinma Ukoha-Kalu is an experimental artist and graphic designer who describes herself as “a sweet baby girl living, working and sweating in Lagos”. She makes art with her environment and is passionate about learning and sharing with people.

Upon the first encounter with Yadichinma’s art, in whichever medium she chose to explore at the time, one is met with surprise, excitement and an almost freeing feeling.

The artist believes that being an experimental artist involves exploring art from a scientific angle, approaching things with open questions, processing them through a series of hypotheses then finally documenting those results which are usually represented through her pieces.

Experimental art takes unfamiliarity as its dominant feature and is concerned with exploring new ideas and technology. It also entails not being limited to particular materials, or not limited because of the unavailability of choice materials.

Her works sometimes relate to each other regardless of the time frame in which they were created. Although the connecting threads are not always defined because most of her work is abstract, Yadichinma’s life experiences influence her style in one way or another, ranging from thoughts to sight to touch to other sensations.

Other life-defining moments that have been translated into her art, recently the historic #EndSARS protests in 2020. After lives were lost, the proceeds from the sale of Yadi’s pieces went to the organizations that helped in the disbursement of funds to families affected.

Creatives in general are always influenced by other creatives’ works or different genres of Literature. Yadichinma’s consumption of creative work across every and any media is largely the reason she explores things widely.

From her mother’s great sensibility for interiors to Dali Salvador’s paintings to musician Vic O’s “daring” musical career, Yadichinma’s art is constantly influenced by people around her and their world.

When creating a piece, deciding what medium to use does not just happen. Sometimes the medium informs the idea, other times it happens vice versa. For example, she could take a mirror and begin to imagine what it feels like in different contexts (the medium informing the idea), at another time she could think of the idea of portals which is something being constantly replicated in her works, and the material to best express that idea would be a mirror (the idea informing the medium).

Creating each piece comes with making a bit of research, learning, and channeling creativity. For Yadi, this process does not necessarily follow a particular order. For instance, with the body of work, she put out, “Of Pure Technical Romance” which exists online as an Instagram page @ofpuretechnicalromance. This series, born from a romantic engagement with technology, had no premeditated plan except to play and find humor within virtual or digital spaces and highlight those moments.

Even though this is constantly changing for her, Yadi’s favourite medium to use at the moment is Oil Pastel on paper. She says she enjoys its texture, and boy does she love to smudge.

For some, passion, vision and consistency are integral to the work of an artist. Yadichinma believes bravery to make work and to feel fulfilled within whatever space one makes for themselves, to be brave enough to go after all the “non-existent, reasonless and nameless things you feel”, is what an artist needs.

When one experiences Yadichinma Ukoha-Kalu’s art, she wants them to feel possibility. The possibility that things can happen if and when one wants them to, and that there are ways to reinvent or rewrite imposed narratives that are limiting.

Most of all, through her work, the artist wants people to understand that freedom is accessible and dynamic for everyone.

Yadichinma would be showing some of her works at ArtXlagos with kó art space from the 4th – 7th of November, 2021.

View all posts by Amarachi Nnoli
Leave a comment