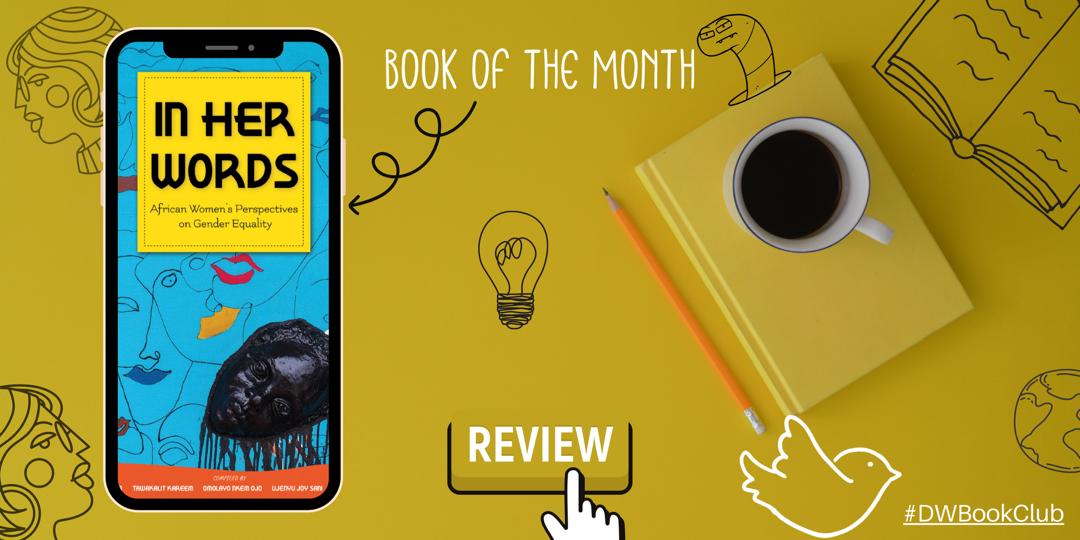 Our book of the month is “In her words”, a collection of stories by African feminist writers with the central theme of these women chronicling the problems they face and experiences they have had that continue to shape and drive their feminism. Each chapter contains vivid images painted with local colour describing the writer’s unique feminist experience as inspired or awakened by their experiences as black, African women.

Chapter 1: When we talk of freedom

Hauwa Shaffi Nuhu, a Nigerian poet and writer, wrote the first chapter. “We are two young women of the same faith—one wearing a wig, and the other a veil, walking the streets of Lagos and holding hands. We are screaming above the noise of passing vehicles and humans, as though all the things we want to talk about cannot wait until we get to our destination, as though our lives in this instant are dependent on this moment. We are laughing like actual witches. And I am thinking this is what it means to be free.” She talks about the hijab concerning freedom and how people tend to project their perceptions of what it means on Muslim women.

”There’s just as many different kinds of feminism as there are women in the world.”- Kathleen Hanna. Amanda Marufu writes about how the human race has created what Terry Real refers to as the “great divide” in which humans have separated themselves into feminine and masculine. The masculine is exalted and femininity devalued.

Chapter 3: Gender and Identity, in the Words of Women from Mauritania to Senegal

Borso Tall’s piece shows the importance and benefits of open dialogue, discussion and narration. She writes about how the immortalisation and retelling of women’s stories in her family shaped her feminism.

Chapter 4: And so it goes

Linda Tusiime, in her narration, sheds light on the “preferential sex” problem. She talks of the devaluing of female children and the clamour for male children. A poignant excerpt from the book goes thus;  “Because somehow, her being born a female meant she wasn’t as much a part of the family as she’d like to believe.” Women are not considered to be fully part of the family because of the notion that they will leave the family and belong to her husband and his family.  The narration also sheds light on the role older women play in enforcing patriarchal norms and teaching younger women “their place”.

Chapter 5: Nigeria and my Feminist Awakening

Chineme Ezekwenna’s feminism was inspired and strengthened by the stark reality of the gender dynamics in Nigeria. She says; “I will never forget the 2015 People v. Turner case in which a Stanford University student, Brock Turner sexually assaulted Chanel Miller. But despite being convicted of three felonies, he received a light sentence and throughout the hearing process, the survivor was blamed for the assault.” And though this case stirred feminist thoughts in her, moving to Nigeria roused it. She talks about how men are emboldened in their misogyny by religion. The erroneous notion that men who pitch in are “helping” their wives, the exclusive training girls get to be good wives and mothers that aren’t extended to boys and other harmful practices are examined.

Chapter 6: To What are we all Aspiring and Does it Matter?

As a result of the institutional backings of the patriarchy, exceptionalism in male-dominated fields by women is the anomaly and so, the weaponisation of some women’s success as supposed lack of ambition in others is dishonest and harmful. Who determines what kind of success suffices? “This is why we need to validate all forms of success so that more African women can aspire to not only the symbolic achievements but also the everyday ones that shape the lives of people across the continent and the world.” Victoria Malowa says, “Female engineers, pilots, architects, are singled out and celebrated because they work in male-dominated professions which seems to authenticate them as successful. But as we focus on their accolades, we ignore the lack of institutional power that forces them to strive so hard to get to the top and even harder to stay there. I also think of how we ignore all the midwives in Isiolo in rural Kenya who without quality medical equipment, have been able to ensure successful births of thousands of children in obscurity.”

Tokenism is prioritised over systemic change. We glorify the stories of struggle and conquest of these women because for women; attaining the heights they have is unprecedented.

Chapter 7: Africans and Feminism: Beyond the Donor Funds

Women’s struggle was so normalised that Makalay Saidiatu Sonda didn’t doubt it’s normalcy or question the morality of it before her feminist awakening. “My mother did not have a son. Instead, she gave the world three girls who were incapable of extending our father’s lineage and caring for him in his old age. How could his daughters do any of that when they would get absorbed in new families who would become their singular focus? As if marriage would take away our personhood. As if being wives somehow meant we couldn’t be daughters.”

She noticed the attempts to control women’s bodies. “I was living in a world so patriarchal, a woman’s body could be controlled by the state, family, and community. A world where her body belonged to everyone except her.”

Nana Sule was shamed for turning down advances from a predatory man and Muslim men used the Quran to show her “a woman’s place. She talks about how women do not need to prove their righteousness to anyone. Can you be married and feminist? “It dawned on me that there seemed to be an implied agreement by everyone, that marriage for a woman meant suffering, the endurance of that suffering, the revelling in it, and the ability to accept inhumane treatment, not only as inevitable, but as the norm.” She narrates an experience she once had, “One day, I received a message from a former co-worker that said, ‘Finally, husband has tamed you and we can now hear word.’ I could almost feel the excitement in his words. I could feel how happy it made him, to think that another woman who was going haywire had ‘learned her place.’” In these parts, feminist is an insult and so, Nana and other African feminists reclaim it in defiance. “When slaves wanted to be free, they were said to be clamouring for their master’s positions. When black men wanted emancipation, they were said to want to equate themselves to whites. And so, when women want to have control over their own lives, to not be beaten, and abused, to not have to give up on their dreams, to be human, they are said to be clamouring to be a man.”

Chapter 9: To be Seen is not a Destination

Nneamaka Nwadei writes on personal perceptions of appearance and body positivity. “Knowing that I could sabotage everything in my path with a wrong or warped understanding of myself and my worth helped me look for options to this unending question of what people saw when they saw me.”

We judge ourselves too harshly and underestimate the power of self-reassurance. “With so many people sharing their thoughts, feelings, and gifts, it’s easy to feel like you’re not being heard. Like you’re not making a difference. But sometimes in our desires to be seen by others, we stop looking into ourselves.”- Lori Deschene. As was profoundly put by Nneamka, “To be seen is not a destination, it is a journey. Some days are better than the others but we don’t stop looking inward.”

Chapter 10: What Kizz Daniel’s ‘Tempted to Steal’ Song Taught me About Gender Roles

Ojonwa Miachi writes about gender roles and how they affect men and women, the notion that certain roles are primarily suited to women and the ensuing overwhelming amount of unpaid domestic labour.

Her parents were told that their family was incomplete without a son and that (in not so direct terms) their daughters were inconsequential.

“Imagine what the reality would have been had my parents yielded to the pressure from outsiders to groom us to be “men’s properties” in the future.” Unlearning internalised biases is a necessity and, this chapter examines said gender biases and their manifestations and impacts.

Chapter 11: On Being Feminist but not Anti-Men

Feminism is perceived as a man and god-hating ideology and so, many women wish to distance themselves from the title “feminist”. Priscilla Sena Bretuo examines the sex/gender conundrum and defines them in relation to the behavioural stereotypes borne of this division.

Chapter 12: Equality in Senegal: a dream or an eternal quest

Chapter 13: She, Too, Belongs Here

Tawakalit Kareem writes about what the most amazing women are expected to do that often involve their own direct or indirect suffering, especially in marriage.

“What’s a little unfair treatment in marriage when you have been blessed with children? That’s what they tell women, isn’t it? To stay, to endure, to chin up and not let women outside move completely into their home.” Many African women endure domestic violence and stay in unfavourable marriages because of society’s expectations.

Ujenyu Joy Sani juxtaposed between feminism and war. She says feminism is war. “The constant pressure I am under to remind the people I encounter that I am as human as my neighbour of the opposite sex.”

Chapter 15: Feminism as Freedom: To Try, To Choose, To Be

“I am passionate about the freedom of people to make the decisions that affect their lives to the extent that those decisions do not infringe on the rights and freedoms of others”. Women’s rights are human rights and should be treated accordingly.

The stories encapsulated in this compilation feel like a warm hug from African feminists to other African feminists. The unique stories of these women have numerous intersections. Even in their individuality, these women show us how the journey for the emancipation of women in Africa is a united front.